And Nothing But the Truth: Judge King-Hamilton 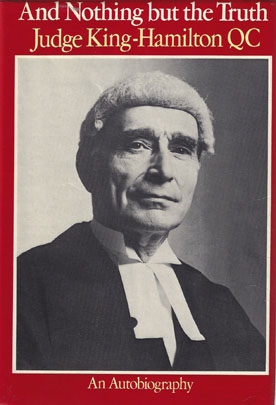 As a judge at the Old Bailey for nearly sixteen years, Alan King-Hamilton was consistently the target of press attention.

He presided over some of the most important and sensational cases of the post-war years, many of which are retold here. They include the giant insurance swindle of the Savundra affair, the identity puzzle of the Peter Hain trial, the Bank of America robbery, the Janie Jones scandal, the Gay News blasphemy trial and his last case, the trial of the Anarchists, when his forthright criticism of the jury's verdict provoked a storm of debate.

Described in the newspapers as 'one of Britain's toughest judges', now in retirement Judge King-Hamilton reconsiders his role as a judge and reveals the problems which faced him during these famous trials.

Assessing his career from his earliest years - from his Presidency of the Union at Cambridge to his appointment as a judge - he provides a behind-the-scenes look at life in Chambers, at the Old Bailey and the Middle Temple.

With a foreword by the Right Honourable Lord Diplock, this book gives a personal and professional appraisal oflegal practice in this country, from one of Britain's most controversial judges who was never afraid to speak his mind.