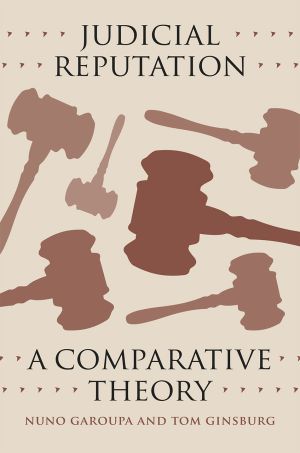 Judges are society's elders and experts, our masters and mediators. We depend on them to dispense justice with integrity, deliberation, and efficiency. Yet judges, as Alexander Hamilton famously noted, lack the power of the purse or the sword. They must rely almost entirely on their reputations to secure compliance with their decisions, obtain resources, and maintain their political influence.

In Judicial Reputation, Nuno Garoupa and Tom Ginsburg show how reputation is not only an essential quality of the judiciary as a whole, but also of individual judges. Perceptions of judicial systems around the world range from widespread admiration to utter contempt, and as judges participate within these institutions some earn respect, while others are scorned. Transcending the conventional lenses of legal culture and tradition that are used to analyze this variation, Garoupa and Ginsburg approach the subject through their long-standing research on the economics of judiciary information and status, examining the fascinating effects that governmental interactions, multi-court systems, extrajudicial work, and the international rule-of-law movement have on the reputations of judges in this era.

Contents:
Preface
Introduction
1.
A Theory of Judicial Reputation and Audiences
2.
Pockets of Exception
3.
Wearing Two Hats: Judges and Nonjudicial Functions
4.
The Selection and Monitoring of Judges: The Spread of Judicial Councils
5.
When Courts Collide: Intracourt Relations and the Problem of Audiences
6.
The Rule of Lawyers: Globalization, International Law, and Judicial Reputation
7.
Conclusion: The Shift toward the External Audience and Lessons for Reform
Appendix A: List of Courts Included in the Dataset
Appendix B: Data on Judicial Councils
Notes
Index