The Sovereignty of Law: Freedom, Constitution and Common Law 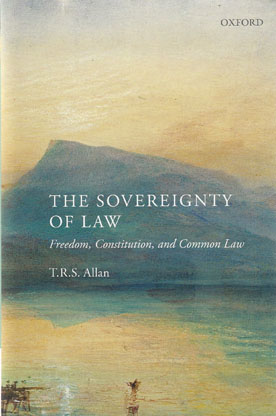 In The Sovereignty of Law Trevor Allan presents an accessible introduction to his influential common law constitutional theory - an account of the unwritten constitution as a complex articulation of legal and moral principles.

The British constitution is conceived as a coherent set of fundamental principles of the rule of law, legislative supremacy, and separation of powers. These principles combine to provide an overarching unity of legality, legitimacy, and democracy, reconciling political authority with individual freedom.

Drawing on the work of Lon Fuller and Ronald Dworkin, Allan emphasizes the normative character of legal interpretation - understanding the implications of statute and precedent by reference to moral ideals of legality and liberty. Allan denies that constitutional law can be reduced to empirical facts about legislative or judicial conduct or opinion. There is no 'rule of recognition' from the lawyer's interpretative viewpoint - only a moral theory of the nature and limits of political authority, which lawyers must construct in order to make sense of legal and constitutional practice.

A genuine republicanism, protecting individual independence, requires the safeguards afforded by judicial review, which must ensure that governmental action is consistent with the rule of law; and the rule of law encompasses not merely the formal equality of all before the law, as enacted or declared, but a more fundamental idea of equal citizenship.

Allan's interpretative approach is applied to a wide range of contemporary issues of public law; his response to critics and commentators seeks to deepen the argument by exploring the theoretical grounds of these current debates and controversies.