The Rise of the Regulatory State of the South: The Infrastructure of Development 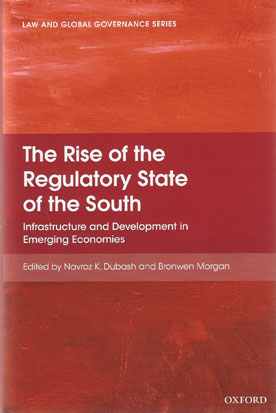 The 1990s and 2000s have witnessed a spurt of energetic institution-building in the developing world, as regulatory agencies emerge to take over the role of the executive in key sectors. This rise of the regulatory state of the south is barely noticed both by scholars of regulation and of development, let alone adequately documented and theorized.

Yet the consequences for the role of the state and modalities of governance in the south are substantial, as politically charged decisions are handed over to formally technocratic agencies, creating new arenas and forms of contestation over the gains and losses from development decisions. Moreover, this shift in the developing world comes at a time when the regulatory state in the north is under considerable stress from the global financial crisis.

This volume seeks to provoke such a discussion by empirically exploring the emergence of regulatory agencies of a range of developing countries across Asia, Africa, and Latin America. The cases focus on telecommunications, electricity, and water: sectors that have often been at the frontlines of this transition.

The central question for the volume is: Are there distinctive features of the regulatory state of the South, shaped by the political-economic context of the global south in the last two decades? To assist in exploring this question, the volume includes brief commentaries on the case studies from a range of disciplines: development economics, law and regulation, development sociology, and comparative politics.

Collectively, the volume seeks to shape the contours of a productive inter-disciplinary conversation on the emergence of a significant empirical phenomenon - the rise of regulatory agencies in the developing world - with implications both for the study of regulation and the study of development.