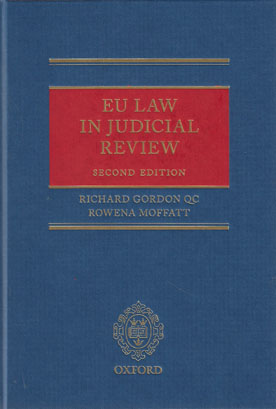 EU law applies in a significant range of areas where public bodies take decisions that are susceptible to judicial review and it is an increasingly important element of the treatment of powers and remedies in public law. EU Law in Judicial Review is the only text of its kind to focus specifically on the relationship, both substantive and procedural, between EU law and UK domestic judicial review.

This new edition provides comprehensive guidance to practitioners on how to act effectively when encountering an EU dimension in the context of judicial review, and is updated to include all the latest developments in this area. Its three-part structure divides the subject into the distinct areas of procedure, principle, and practice and displays them in a clear and functional layout, allowing for ease of use and reference.

Part One takes as its starting point the UK domestic judicial review procedures, grounds, and remedies, and analyses them from an EU standpoint. Part Two turns to the fundamental rights and principles of law which underpin EU law. Finally, in Part Three, the book considers in detail the key areas in which judicial review and EU law interact, including competition law, state aid, public procurement, and the free movement of goods, services, and persons.

The new edition has been extensively revised to incorporate significant legal developments, in particular decisions since the Treaty of Lisbon entered into force on 1 December 2009.