One Nation Under Surveillance: A New Social Contract to Defend Freedom Without Sacrificing Liberty 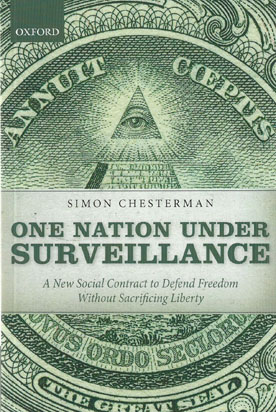 What limits, if any, should be placed on a government's efforts to spy on its citizens in the interests of national security? Spying on foreigners has long been regarded as an unseemly but necessary enterprise.

Spying on one's own citizens in a democracy, by contrast, has historically been subject to various forms of legal and political restraint. For most of the twentieth century these regimes were kept distinct. That position is no longer tenable. Modern threats do not respect national borders.

Changes in technology make it impractical to distinguish between 'foreign' and 'local' communications. And our culture is progressively reducing the sphere of activity that citizens can reasonably expect to be kept from government eyes. The main casualty of this transformed environment will be privacy. Recent battles over privacy have been dominated by fights over warrantless electronic surveillance or CCTV; the coming years will see debates over data-mining and biometric identification.

By reframing the relationship between privacy and security in the language of a social contract, mediated by a citizenry who are active participants rather than passive targets, the book offers a framework to defend freedom without sacrificing liberty.

Contents:
Introduction: The End of Privacy
PART I: CONTEXT
1. The Spy Who Came In from the Cold War
2. The Exception and the Rule
3. Secrets and Lies
PART II: CASES
4. The United States Before and After 9/11
5. Britain Before and After the European Convention on Human Rights
6. The United Nations Before and After Iraq
PART III: LESSONS
7. Oversight and Review
8. Limits on the Collection or Use of Intelligence
9. A New Social Contract