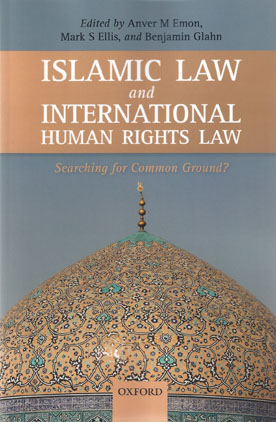 The relationship between Islamic law and international human rights law has been the subject of considerable, and heated, debate in recent years.

The usual starting point has been to test one system by the standards of the other, asking is Islamic law 'compatible' with international human rights standards, or vice versa. This approach quickly ends in acrimony and accusations of misunderstanding. By overlaying one set of norms on another we overlook the deeply contextual nature of how legal rules operate in a society, and meaningful comparison and discussion is impossible.

In this volume, leading experts in Islamic law and international human rights law attempt to deepen the understanding of human rights and Islam, paving the way for a more meaningful debate. Focusing on central areas of controversy, such as freedom of speech and religion, gender equality, and minority rights, the authors examine the contextual nature of how Islamic law and international human rights law are legitimately formed, interpreted, and applied within a community.

They examine how these fundamental interests are recognized and protected within the law, and what restrictions are placed on the freedoms associated with them. By examining how each system recognizes and limits fundamental freedoms, this volume clears the ground for exploring the relationship between Islamic law and international human rights law on a sounder footing.

In doing so it offers a challenging and distinctive contribution to the literature on the subject, and will be an invaluable reference for students, academics, and policy-makers engaged in the legal and religious debates surrounding Islam and the West.

Contents:
Foreword
Editors' Introduction
PART I: ISLAMIC LAW AND INTERNATIONAL HUMAN RIGHTS LAW
Narrating Law
Shari'a and the Modern State
Commentary to Anver M. Emon "Shari'a and the Modern State" and Kathleen Cavanaugh "Narrating Law"
Clearing Ground: Comment on "Shari'a and the Modern State"
Commentary: Shari'a as Rule of Law
PART II: FREEDOM OF SPEECH
Rethinking the Universality of Human Rights: A Comparative Historical Proposal for the Idea of "Common Ground" with Other Moral Traditions
Negotiating Speech in Islamic Law and Politics: Flipped Traditions of Expression
The Great Divide and the Common Ground Between the United States and the Rest of the World
PART III: FREEDOM OF RELIGION
Freedom of Religion and Belief in International Law: A Comparative Analysis
Pre-Modern Islamic Legal Restrictions on Freedom of Religion, with Particular Reference to Apostasy and its Punishment
The Freedom of Religion and Expression: A Rule of Law Perspective
Commentary
PART IV: WOMEN'S EQUALITY
Unveiling Equality: Disciplining the 'Other' Woman Through Human Rights Discourse
Women in Search of Common Ground Between Islamic and International Human Rights Law
Women and Islamic Law - Commentary
Islamic and International Law: Searching for Common Ground: Musawah, CEDAW, and Muslim Family Laws in the 21st Century
PART V: MINORITY RIGHTS
Religious Minorities and Islamic Law: Accommodation and the Limits of Tolerance
The Dialectic of International Law and the Contested Approaches to Minority Rights
Religious Minorities and Islamic Law
Islam vs. the Shari'a: Minority Protection within Islamic and International Legal Traditions
Epilogue: Common Ground or Clearing Ground?