Political Participation of Minorities: A Commentary on International Standards and Practice 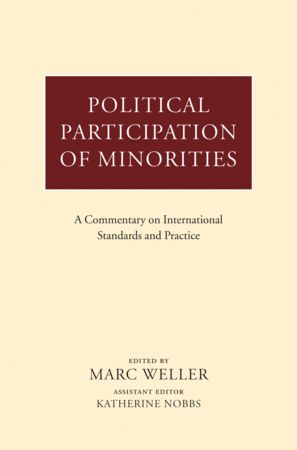 This Commentary provides the reader with a review of international standards and practice relating to the political participation of minorities. Political participation has been increasingly recognized as a foundational issue in the debate about minority rights. It is argued that minorities are more likely to feel co-ownership in the state if they have the opportunity to participate freely and effectively in all aspects of its governance, and that sustained and meaningful engagement will guard against the sense of alienation and exclusion among minorities that often emerges in ethnically divided societies.

Taking as its starting point the two most important standard-setting documents in the field - the Lund Recommendations on the Effective Participation of National Minorities in Public Life, developed by the Organization for Security and Cooperation in Europe, and the Council of Europe's Thematic Commentary on the Issue of Political Participation of Minorities - the Commentary locates the international legal entitlement to political participation within the wider context of the right to democratic governance.

It also considers effective participation in relation to the right to full and effective equality, as well as the legal entrenchment of these provisions and implementation mechanisms. Individual chapters then consider each of the principal mechanisms aimed at enhancing political participation, ranging from procedures covering minority representation in political institutions to consultative mechanisms and autonomy solutions.

The Commentary draws on a team of experts, all of whom are recognized authorities in this specialized area of minority issues.