The WTO Anti-Dumping Agreement: A Commentary 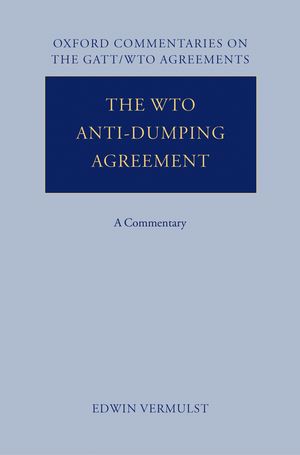 While the book of necessity goes into great detail about the intricacies of anti-dumping law and practice, it attempts to explain the various concepts in a relatively non-technical manner by means of simplified examples that are easy to grasp for experts and non-experts alike.

The book also pays extensive attention to interpretations of the various provisions of the Anti-Dumping Agreement by WTO panels and the Appellate Body. There have been more WTO cases under the Anti-Dumping Agreement than under any other WTO Agreement, reflecting both the increased recourse to anti-dumping measures by WTO members all over the world and the complexity of abiding by the WTO rules. WTO Panels and the Appellate Body, called upon to review administrative determinations and aspects of national legislation, have done a remarkable job in interpreting the WTO rules.

For WTO members, wishing to impose anti-dumping measures in a WTO-consistent manner, knowledge not only of the Agreement itself, but also of such interpretations, is therefore a must.