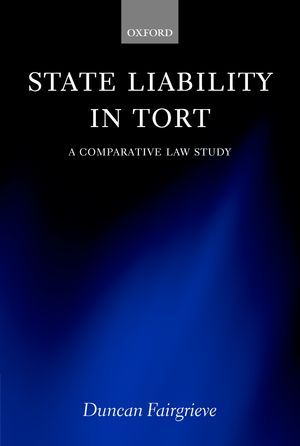 This book examines the topical sphere of governmental liability in damages arguing that that there has been an important shift in the traditional English law approach as illustrated in a series of recent House of Lords decisions.

A detailed analysis is made of the torts applying to public bodies, including negligence, misfeasance in public office, nuisance and breach of statutory duty, as well as the influence of European human rights law and community law, with discussion of the availability of damages under the Human Rights Act 1998 and the impact of the controversial decision of the European Court of Human Rights in Osman v UK and the subsequent retreat in Z v UK.

The discussion of state liability is also placed within the context of the evolving attitude of the courts to public law remedies, with a detailed reconsideration of the relationship between ultra vires and liability in damages. From a comparative law perspective, it is argued that contrary to orthodox doctrinal opinion there are many similarities in the English and French law of administrative liability, with parallels in the treatment of different types of loss, causation, finding of fault, and underlying policy concerns.

The author discusses the direction in which English law might now move, as well as analysing less orthodox sources of compensation such as the practice of the ombudsmen and statutory funds including the new French medical negligence compensation scheme.