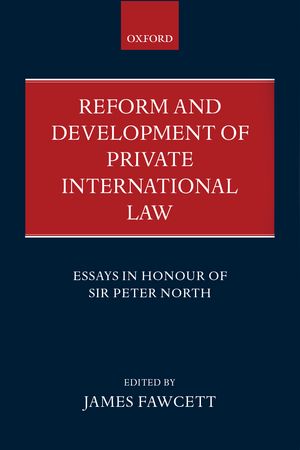 A number of contributors discuss various aspects of the ever-growing Europeanization of private international law. Ian Fletcher focuses on the EC Regulation on Insolvency Proceedings and its impact upon established law and practice in England and Wales. Paul Beaumont examines questions of legal basis and external competence and the best way for the UK and Europe to be represented in issues of private international law globally as well as offering a technical analysis of the contract provision;of the Brussels I Regulation. Hans Ulrich Jessurun d'Oliveira examines the uneasy relationship between the European Union and private international law and the movement towards eroding the latter. Peter Nygh compares declining jurisdiction under the Brussels I Regulation and the preliminary draft;Hague Judgments Convention.

Other contributors have concentrated on aspects of the reform of private international law on a world-wide basis. Jonathan Harris discusses the Hague Convention on the Law Applicable to Trusts and on their Recognition 1985 in his examination of the trust in private international law. Not surprisingly there is much discussion in this book of the ambitious project that has been absorbing the Hague Conference for nearly ten years, namely a Hague Convention on Jurisdiction and Foreign Judgments in Civil and Commercial Matters. David McClean discusses the history of the project and, if it does fail, a possible way forward.