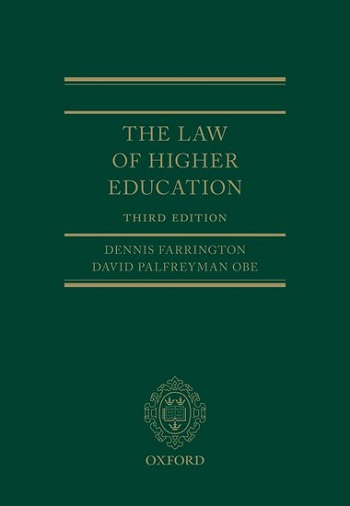 Written by two leading higher education practitioners, this comprehensive and practical guide to the law of higher education in the UK provides extensive analysis of the complex legal framework in which universities work and the remedies which may be sought in the event of disputes.

The Law of Higher Education has been fully updated to take account of the many legislative changes which have come into force since the publication of the second edition in 2012. New sector legislation in place in England, Scotland and Wales, with fundamental changes in the way higher education is regulated and changes in the general law (e.g. data protection, prevention of terrorism, consumer protection) and how they affect the operation of institutions are all dealt with in detail, with reference to and analysis of the relevant case law throughout.

Additionally attention is given to new responsibilities faced by institutions under the General Data Protection Regulation. Although focussing on UK laws, material on the international context is examined, which remains particularly important as institutions are increasingly involved in international exchanges and collaborations, as well as being subject to the increasing globalisation of higher education.