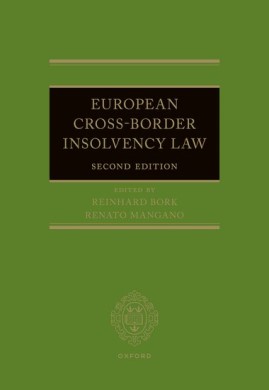 The first edition of this textbook was published in 2016, but since then the legal and factual scenario of European cross-border insolvency law has changed dramatically. In particular, three main events have occurred. First of all, the prescriptions of Regulation (EU) 2015/848 (Recast) have become applicable; second, the UK has left the European Union, without this completely reducing the meaning of the regulation for the UK though; and third, the European Union has enacted Directive (EU) 2019/1023 on preventive restructuring and insolvency.

Moreover, since 2016, the Court of Justice of the European Union (CJEU) has delivered significant new judgments, albeit regarding the Regulation (EU) 1346/2000; national courts have started applying the prescriptions of Regulation (EU) 2015/848; scholars have produced numerous papers and commentaries on Regulation (EU) 2015/848; and the United Nations Commission on International Trade Law (UNCITRAL) has issued relevant new documents such as the 2018 'Model Law on Recognition and Enforcement of Insolvency-Related Judgments' and the 2019 'Model Law on Enterprise Group Insolvency'.

The second edition of this textbook maintains its original purpose of providing readers with a user-friendly framework so that they may understand the rationale of Regulation (EU) 2015/848 and be consistent in their application of its prescriptions. However, in order to analyse the impact of the new events and discuss the most recent interpretations of judges and scholars, each chapter has been given new bibliographical references, supplemented with further observations, and, in some cases, even reorganised.