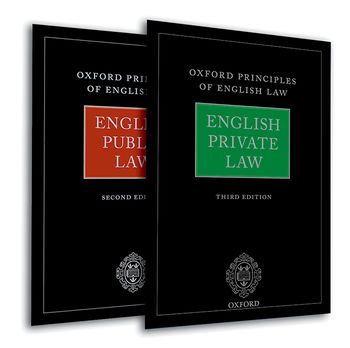 Oxford Principles of English Law, edited by Professor Andrew Burrows is the essential first point of reference on English law for lawyers in the UK and throughout the world.

Now in its third edition, English Private Law has established itself as a key point of reference on English private law for lawyers in the UK and throughout the world. The book acts as an accessible first point of reference for practitioners approaching a private law issue for the first time, whilst simultaneously providing a lucid, concise and authoritative overview of all the key areas of private law. This includes contract, tort, unjust enrichment, land law, trusts, intellectual property, succession, family, companies, insolvency, private international law and civil procedure.

Each section is written by an acknowledged expert, using their experience and understanding to provide a clear distillation and analysis of the subject. This new edition includes all the recent developments since the publication of the second edition, covering some areas that were previously not addressed including arbitration in civil procedure, the Human Rights Act 1998 in tort law, and regulatory reform in the light of the global financial crisis.

No other single text provides such comprehensive and lucid coverage of the whole of English private law as this one - the book's depth of analysis, combined with its ease of reference, make it a favourite among academics and students worldwide.

The second edition of English Public Law acts as an accessible first point of reference for practitioners approaching a public law issue for the first time, whilst simultaneously providing a lucid, concise and authoritative overview of all the key areas of public law (constitutional, administrative, human rights, and criminal law) within one single portable volume.

The second edition has been fully revised and updated to take into account all key legislative and procedural changes since 2004, including; - the gradual bringing into force of both the Proceeds of Crime Act 2002 and the Criminal Justice Act 2003 - the Civil Partnerships Act 2004 - the Constitutional Reform Act 2005 (including the anticipated introduction of the Supreme Court in October 2009) - recent higher courts decisions concerning public law and human rights; - the Criminal Procedure Rules 2005; - the Serious Organised Crime and Police Act 2005; - the Armed Forces Act 2006; - the Equality Act 2006; - the Consolidated Criminal Practice Direction; - the Criminal Justice and Immigration Act 2008; - changes introduced by the Tribunals Service throughout 2007 and 2008

Both books are an ideal quick reference for practitioners to fall back on when a client raises a point outside their normal area of expertise as well as for academics, overseas libraries, and practitioners overseas who want a one-stop resource on English private and public law.