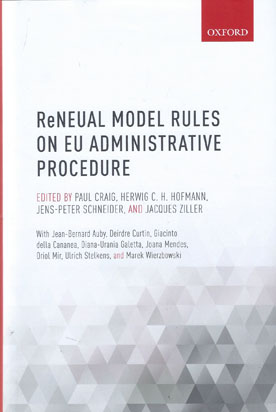 The Research Network on EU Administrative Law (ReNEUAL) was established in 2009 and now comprises well over one hundred scholars and practitioners active in the field of EU and comparative public law.

The aim of the network is to contribute to the development of a legal framework in which the constitutional values of the EU can be embedded in the exercise of public authority.

Drafted by four working groups addressing the main aspects of EU administrative procedure, the ReNEUAL Model Rules offer a toolkit for European and domestic authorities seeking to regulate administrative action, reinforcing general principles of EU law and identifying, on the basis of comparative research, best practices in different specific policies of the EU. The book includes an extended introduction chapter, followed by the Model Rules, which are organised into six parts.