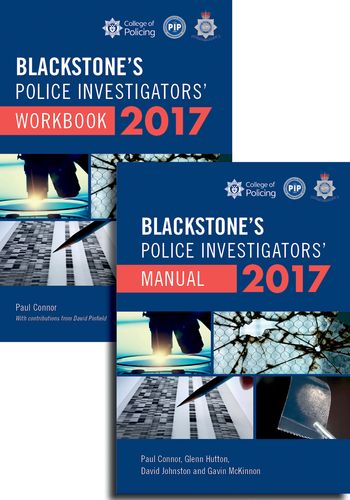 
Blackstone's Police Investigators' Manual and Workbook 2017 are the only official study guides for the National Investigators' Exam (NIE), which is taken as part of Phase 1 of the Initial Crime Investigators' Development Programme. It is the most comprehensive and effective package for studying for the NIE, providing the complete 2016 syllabus and practical exercises and multiple-choice questions to test your knowledge.

Based on the bestselling Blackstone's Police Manuals, Blackstone's Police Investigators' Manual 2017 provides all the legal information which is relevant to your role as a trainee investigator and is applicable to all NIE exams taken in 2017. Covering all key legislation in the areas of Evidence, Property Offences, Assaults, Drugs, Firearms & Gun Crime, and Sexual Offences, it also features the relevant PACE Codes of Practice, with chapters incorporating the relevant Code with Keynotes offering practical advice and examples, as well as chapters covering the Immigration Act 1971 and the Customs & Excise Management Act 1979 for investigators within immigration, customs, and the National Crime Agency.

Blackstone's Police Investigators' Workbook 2017 has 23 chapters, offering you an opportunity to gauge your revision progress through multiple-choice questions at each chapter opening, followed by a refresher section on complex parts of the syllabus with exercises and flowcharts, and recall questions at the conclusion to reinforce learning. Useful cross references point back to the Manual in the answer sections. Now in its seventeenth edition, both the Manual and Workbook contain the latest legislation and case law relevant to the 2017 NIE, including the Modern Slavery Act 2015, the Anti-social Behaviour, Crime and Policing Act 2014, the Criminal Justice Act 2015, the Criminal Justice and Courts Act 2015, and the Criminal Procedure Rules 2015, as well as revised PACE Code E (February 2016).