Reason, Morality, and Law: The Jurisprudence of John Finnis 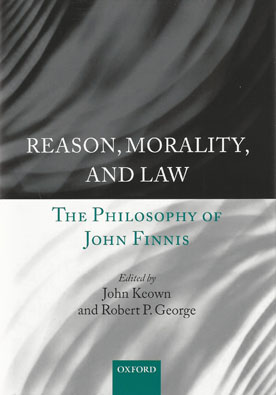 John Finnis is a pioneer in the development of a new yet classically-grounded theory of natural law. His work offers a systematic philosophy of practical reasoning and moral choosing that addresses the great questions of the rational foundations of ethical judgments, the identification of moral norms, human agency, and the freedom of the will, personal identity, the common good, the role and functions of law, the meaning of justice, and the relationship of morality and politics to religion and the life of faith.

The core of Finnis' theory, articulated in his seminal work Natural Law and Natural Rights, has profoundly influenced later work in the philosophy of law and moral and political philosophy, while his contributions to the ethical debates surrounding nuclear deterrence, abortion, euthanasia, sexual morality, and religious freedom have powerfully demonstrated the practical implications of his natural law theory.

This volume, which gathers eminent moral, legal, and political philosophers, and theologians to engage with John Finnis' work, offers the first sustained, critical study of Finnis' contribution across the range of disciplines in which rational and morally upright choosing is a central concern. It includes a substantial response from Finnis himself, in which he comments on each of their 27 essays and defends and develops his ideas and arguments.

Contents:
Editor's Preface
Introduction: The Achievement of John Finnis
REASONS, GOODS, AND PRINCIPLES
1. Value: A Menu of Questions
2. Finnis on Well-being
3. Reasoning about the Human Good, and the Role of the Public Philosopher
4. On the Most Fundamental Principle of Morality
5. What is Natural Law Like?
INTENTIONS IN ACTION
6. Intention and Side-effects: John Finnis and Elizabeth Anscombe
7. Intention and Side-effects: The mens rea for Murder
8. John Finnis on Thomas Aquinas on Human Action
9. On Moral Philosophy and Kinds of Human Actions
JUSTICE, RIGHTS, AND WRONGDOING
10. Finnis on Justice
11. Retributivism in the Spirit of Finnis
12. The Nature of Limited Government
13. Pure Perfectionism and the Limits of Paternalism
14. "Lawful mercy" in Measure for Measure
15. The Natural Law Position on the Basis for Being a Subject of Rights
16. Constitutional and Other Persons
17. Bioethics after Finnis
18. A New Father for Medical Law
PHILOSOPHY OF LAW
19. Ideas of Easy Virtue
20. The Irony of Law
21. Law and its Theory: A Question of Priorities
22. Value, Practice, and Idea
23. Constitutional Principle in the Laws of the Commonwealth
24. Finnis on Legal and Moral Obligation
25. Intention and the Allocation of Risk
PHILOSOPHY, RELIGION, AND PUBLIC REASONS
26. The Right to Religious Liberty and the Coercion of Belief: A Note on Dignitatis Humanae
27. Natural Law and the Transcendent Source of Human Fulfillment
RENVOI
28. Responses
Bibliography of the Published Works of John Finnis