Power to the People: Constitutionalism in the Age of Populism (eBook) 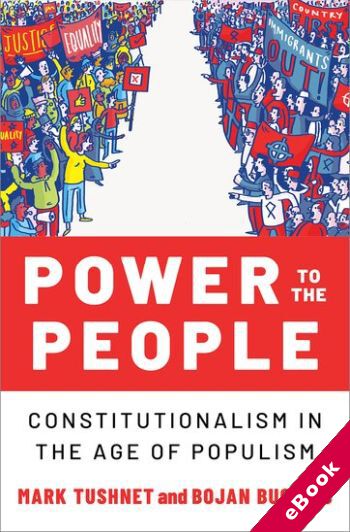 
ISBN13: 9780197606735
Published: April 2022
Publisher: Oxford University Press
Country of Publication: UK
Format: eBook (ePub)
Price: £25.82
The amount of VAT charged may change depending on your location of use.
Convert Currency

Power to the People offers a thin definition of constitutionalism that people from the progressive left to the conservative right should be able to agree on even if they would supplement the thin definition withn other more partisan ideas. This is followed by a similarly basic definition of populism. Comparing the two, this book argues that one facet of populism -its suspicion of institutions that are strongly entrenched against change by political majorities-is sometimes inconsistent with constitutionalism'sbthinly understood definition.

The book provides a series of case studies, some organized by nation, others by topic, to identify, more precisely, when and how populist programs are inconsistent with constitutionalism-and, importantly, when and how they are not. Concluding with a discussion of the possibilities for a deeper, populist democracy, the book examines recent challenges to the idea that democracy is a good form of government by exploring possibilities for new, albeit revisable, institutions that can determine and implement a majority's views without always threatening constitutionalism.