Four Internets: Data, Geopolitics, and the Governance of Cyberspace 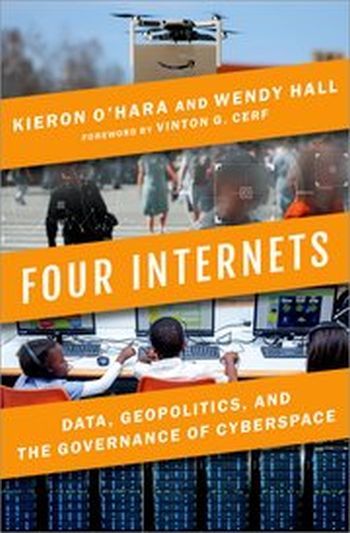 The Internet has become a staple of modern civilized life, now as vital a utility as electricity. But despite its growing influence, the Internet isn't as stable as it might seem; rather, it can be best thought of as a network of networks reliant on developing technical and social measures to function, including hardware, software, standards, and protocols. As millions of new internet users sign on each year, governing bodies need to balance evolving social ideas surrounding internet use against shifting political pressures on internet governance—or risk disconnection.

Four Internets offers a revelatory new approach for conceptualizing the Internet and understanding the sometimes rival values that drive its governance and stability. Four Internets contends that the apparently monolithic "Internet" is in fact maintained by four distinct value systems—the Silicon Valley Open Internet, the Brussels Bourgeois Internet, the DC Commercial Internet, and the Beijing Paternal Internet—competing to determine the future directions of internet affordances for freedom, innovation, security, and human rights. Starting with an analysis of the original vision of an "Open Internet," the book outlines challenges facing this vision and the subsequent rise of other internets popularized through political and monetary machinations. It then unravels how tensions between these internets play out across politics, economics, and technology, and offers perspectives on potential new internets that might arise from emerging technologies like artificial intelligence and smart cities. The book closes with an evaluation of whether all these models can continue to co-exist—and what might happen if any fall away.

Visionary and accessible, Four Internets lends readers the confidence to believe in a diverse yet resilient Internet through a deeper understanding of this everyday commodity.