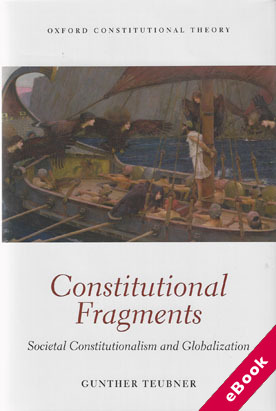 
ISBN13: 9780191629341
Published: February 2012
Publisher: Oxford University Press
Country of Publication: UK
Format: eBook (ePub)
Price: £33.32
The amount of VAT charged may change depending on your location of use.
Convert Currency

In recent years a series of scandals have challenged the traditional political reliance on public constitutional law and human rights as a safeguard of human well-being. Multinational corporations have violated human rights; private intermediaries in the internet have threatened freedom of opinion, and the global capital markets unleashed catastrophic risks.

Constitutionalism and the Paradox of Principles and Rules: Between the Hydra and Hercules
Marcelo Neves
ISBN 9780192898746
Published April 2021
Oxford University Press
£80.00

Constitutionalism and the Paradox of Principles and Rules: Between the Hydra and Hercules (eBook)
Marcelo Neves
ISBN 9780192653956
Published April 2021
Oxford University Press
£66.67