The 1949 Geneva Conventions: A Commentary (eBook) 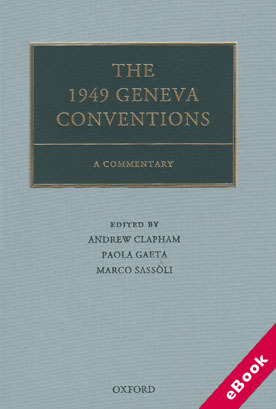 
ISBN13: 9780191003530
Published: October 2015
Publisher: Oxford University Press
Country of Publication: UK
Format: eBook (ePub)
Price: £65.83
The amount of VAT charged may change depending on your location of use.
Convert Currency

The four Geneva Conventions, created in 1949, remain the fundamental basis of contemporary international humanitarian law. They protect the wounded on the battlefield, those wounded or shipwrecked at sea, the treatment of prisoners of war, and civilians in a war zone. However, since they were adopted warfare has changed considerably.

The context in which the Conventions are applied and interpreted has changed considerably since they were first written. The borderline between international and non-international armed conflicts is not as clear-cut as was once thought, and is complicated further by the use of armed force mandated by the United Nations and the complex nature of certain internal armed conflicts.

The influence of other developing branches of international law, such as human rights law and refugee law has been considerable. The development of international criminal law has breathed new life into multiple provisions of the Geneva Conventions.

This commentary adopts a thematic approach to provide detailed analysis of each key article, taking into account both judicial decisions and state practice. Cross-cutting chapters on issues such as transnational conflicts and the geographical scope of the Conventions also give readers a full understanding of the impact of the Geneva Conventions in their contemporary context.

This commentary on four of the most important treaties in international law is unmissable for anyone working in or studying situations of armed conflicts.

Contents:
1. The Concept of International Armed Conflicts - The Interplay Between 1949 Geneva Conventions and International Human Rights Law
2. The Temporal Scope of Application of the Conventions
3. Rights, Powers and Obligations of Neutral Powers under the Conventions
4. The Obligation to Respect and to Ensure Respect for the Conventions
5. Special Agreements - The Status, Rights and Obligations of Medical and Religious Personnel
6. Non Renunciation of the Rights Provided by the Conventions
7. Final Provisions
8. The Principle of Non-discrimination
9. Hospitals - Dissemination of the Conventions, Including in Time of Armed Conflict
10. Humanitarian Assistance
11. Search for Missing Persons
12. The Dead
13. Taking of Hostages
14. Torture and Inhumane or Degrading Treatment
15. Rape and Sexual Violence
16. Protected Areas
17. The Concept of Non International Armed Conflict
18. The Addressees of Common Article 3
19. The Beneficiaries of the Rights Stemming from CA3
20. Judicial Guarantees
21. The Right of Initiative of the ICRC - The Structure of and Resulting Gaps in GC IV
22. Applicability of the Conventions by means of Special Agreements
23. The Role of the ICRC
24. Protecting Powers
25. Conciliation Procedure and Enquiry
26. Prohibition of Reprisals
27. The System of Repression of Grave Breaches - The Interplay Between the Geneva Conventions and International Criminal Law
28. Domestic Implementation
29. The Universality of the 1949 Geneva Conventions and Customary International Law
30. Relationship with Prior or Subsequent Treaties and Conventions
31. Who is Wounded and Sick?
32. Who is Shipwrecked?
33. The Obligations to Respect, Protect, Collect and Care for
34. Buildings, Material and Transports
35. Loss of Protection
36. The Use of the Emblem
37. Who is a Prisoner of War?
38. Status and Treatment of those who do not Fulfill the Conditions for Prisoner of War Status - Admissibility of and Procedures for Internment
39. Treatment of Prisoners of War
40. Relations with the Outside World
41. Prosecution of Prisoners of War
42. Repatriation of Prisoners of War - The Concept and the Beginning of Occupation
43. Maintenance and Reestablishment of Family Links and Transmission of Information
44. The Administration of Occupied Territory
45. Who is a Protected Civilian?
46. The Prohibition of Collective Punishment
47. Transfer of Civilians
48. Judicial Guarantees
49. Right to leave - Other Issues Related to the Treatment of Civilians in Enemy Hands
50. Special Rules on Women
51. Special Rules on Children
52. Special Rules on Refugees
53. Treatment of Internees - End of Internment
54. Treatment of Internees
55. Laws and Judicial System of the Occupied Territories - Protection of Private Property
56. Prohibition of Settlements
57. The End of Occupation
58. Transfer of POWs
59. The Protection of Public Property

The UN Convention on the Elimination of All Forms of Discrimination Against Women and its Optional Protocol 2nd ed
Edited by: Patricia Schulz, Ruth Halperin-Kaddari, Beate Rudolf, Marsha A. Freeman
ISBN 9780192862815
Published December 2022
Oxford University Press
£195.00

The International Convention on the Elimination of All Forms of Racial Discrimination: A Commentary
Patrick Thornberry
ISBN 9780198827405
Published March 2018
Oxford University Press
£39.99

The International Convention on the Elimination of All Forms of Racial Discrimination: A Commentary
Patrick Thornberry
ISBN 9780199265336
Published July 2016
Oxford University Press
£137.50

The Conventions on the Privileges and Immunities of the United Nations and its Specialized Agencies: A Commentary
Edited by: August Reinisch, Peter Bachmayer
ISBN 9780198744610
Published March 2016
Oxford University Press
£245.00

The UN Convention on the Elimination of All Forms of Discrimination Against Women: A Commentary
Edited by: Marsha A. Freeman, Christine Chinkin, Beate Rudolf
ISBN 9780199682249
Published July 2013
Oxford University Press
£62.00

The UN Convention on the Elimination of All Forms of Discrimination Against Women: A Commentary (eBook)
Edited by: Marsha A. Freeman, Christine Chinkin, Beate Rudolf
ISBN 9780191630095
Published January 2012
Oxford University Press
Out of print

The UN Convention on the Elimination of All Forms of Discrimination Against Women: A Commentary
Edited by: Marsha A. Freeman, Christine Chinkin, Beate Rudolf
ISBN 9780199565061
Published January 2012
Oxford University Press
Out of print

The Rights of Minorities: A Commentary on the European Framework Convention for the Protection of Minorities
Edited by: Marc Weller
ISBN 9780199207626
Published August 2006
Oxford University Press
£68.00

The Rights of Minorities: A Commentary on the European Framework Convention for the Protection of National Minorities
Edited by: Marc Weller
ISBN 9780199278589
Published March 2005
Oxford University Press
£162.50

Commentaries on Arms Control Treaties: Volume 1- The Convention on Prohibition of Use, Stockpiling, Production and Transfer of Anti-Personnel Mines
Stuart Maslen
ISBN 9780199296798
Published March 2004
Oxford University Press
Out of print