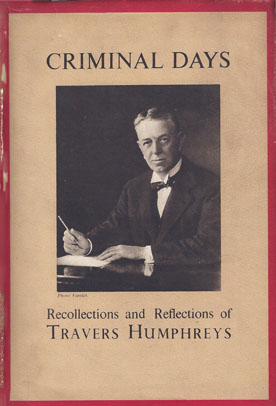 It is held that a Judge while on the active list should notexpress in public his views upon matters which have come or may come before him in his judicial capacity. Nor do I think it desirable that he should comment however favourably upon members of the profession still living.

I hope that this book of recollections and reflections- will not be found to offend against either of those rules. The book does not extend beyond the time, now nearly eighteen years ago, when I exchanged the absorbing profession of an Advocate for the onerous and responsible position of a Judge.

As to the origin of the book - During an uneventful Summer Assize I spent some of my leisure in putting on paper the ideas now embodied in Chapter 8. If, however, there were such a compilation as a Stud Book of Books, this volume might be entered as by Lumbago out of Long Vacation/which is I trust sufficiently self-explanatory.

This is a book for the most part about the past. The younger generation is looking forward to an England in which life shall be freer, fairer and better, in which wealth and opportunities for advancement shall be more evenly distributed than of yore. If they will but hold fast to the English ideals of justice and liberty for every individual man and woman, and remember that the State exists for the benefit of the community, not the community for the benefit of the State, I believe they may attain some of their desires. Meanwhile I may be forgiven for announcing in the language of the broadcaster